The price for a scalp micropigmentation procedure is typically about 1/4 of the cost of a hair transplant surgery. For the average male or female experiencing pattern baldness in both the hairline and crown areas, the price for the procedure can range between $1200 – $3500 with the average price in the US costing about $2450 (CLICK HERE FOR A QUOTE). This sliding scale typically varies based on a few factors such as the experience of the artist, the amount of hair loss (see the Norwood scale below), and even the city that the clinic is located can also play a role in the cost.
AM I A CANDIDATE?
$1200 - $3500
$500-$1200
See Below

DO YOU ACCEPT PAYMENT PLANS?

Payment plans are now available through our financing partner. Plans start at 0% APR with options from 6-24 monthly installments.

HOW TO FIND AN EXPERIENCED ARTIST

Trying to find someone who is offering the lowest price might work well when shopping for car insurance, but be wary of implementing the same strategy when choosing an artist. The most expensive SMP is the one you have to pay for twice. When looking for an artist there are some things to consider such as, how long they have been in the business, do they continue to educate themselves with new equipment and techniques, is their studio sanitary, and can you get them on the phone whenever a question arises.

The simplest way to find a local artist is to go to Google Maps, search for “Scalp Micropigmentation” in your state, and do some research on the studios that come up in the area. Don’t be afraid to ask for pictures of their work because every artist has different styles and you want to make sure that their style aligns with your vision.

Don’t be afraid of traveling for the right artist. If you have to take a 90-minute road trip to choose someone that you feel comfortable with, do it! The results will last for years, so do your due diligence.

Receive a Free 30-Min phone consultation with a leading practitioner at Scalps to talk about your hairline goals.

Factors that Affect the Cost of Your Scalp Micropigmentation Procedure

The cost of a scalp micropigmentation procedure varies based on several factors, including the size of the treatment area, your type of skin, if you have scarring, and how dense your original hair is.

Of course, one of the biggest factors that dictate the price of micropigmentation will be the cumulative size of the treatment area determined by the size of the head and the extent of the hair loss.

The majority of our clients suffer from male pattern baldness, the severity of which is determined by The Norwood scale. If you are in the earlier stages of balding, treatment will be less costly compared to addressing the larger treatment areas associated with the later stages. MPB cannot be prevented and generally follows these stages:

Pricing for those suffering from other conditions that result in hair loss in the form of general thinning, patching, or complete baldness will be established in the same way—the cumulative size of the treatment area determined by the size of the head and the extent of the hair loss.

Receive a Free 30-Min phone consultation with a leading practitioner at Scalps to talk about your hairline goals.

The vast majority of our clients have a skin type that falls into what we would consider a normal range. However, there are a number of different skin types and conditions that require special accommodations which may affect the price of your treatment plan.

New skin may also affect the procedure. Let your technician at Hairline Ink know if you’ve recently received a hair transplant. Sometimes collagen forms at the site of the new grafts, which makes the skin very soft and act like a sponge when the pigment is injected into that area. Scalp Micropigmentation and hair transplant procedures can be a very effective combination, but just be sure to consult with your technician to discuss time and technique to achieve optimal results.

The presence of scarring may also require special time and consideration from a technician at Scalps. Since hair does not grow over scar tissue, and micropigmentation is meant to mimic natural hair stubble, other accommodations must be made.

Camouflage Ink “fades” the scar by first blending the discoloration into the surrounding skin before moving forward with our standard micropigmentation procedure to give the appearance of natural hair growth, as if the scar was never even there. 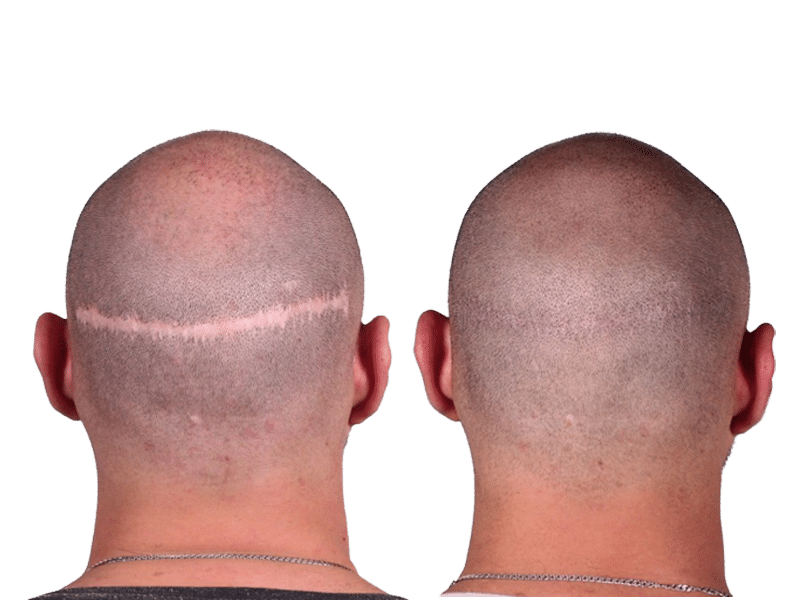 Even with a full head of hair, the natural density of one’s hair can vary greatly from person to person. Blondes, for example, have an average of 150,000 individual hair follicles, while redheads may have as few as 90,000. For the most natural look, we take into account the fullness and distribution of your natural hair. However, if you’re not happy with the natural distribution of your hair, talk to your technician about using micropigmentation to fill out the appearance of your existing hair.

The style you choose will also determine the density of the treatment and the time required to accomplish the look. A “wet shave” look is a very light treatment option, while a classic fade needs extra density in places which means extra treatment time.

All treatments are priced individually based on the above-mentioned factors. To get a better idea of the cost of scalp micropigmentation for your specific case, schedule a consultation with one of our skilled SMP artists.

WHAT OUR CUSTOMERS SAY

SCALPS | Scalp Micropigmentation Centers
5
Based on 33 reviews
Ruth Diaz
05/11/2022
The whole process was very professional. Hair transplants weren't an option for me because I would have needed at least 3 transplants to get my hair full looking. So, I decided to try micro-pigmentation instead after my surgeon suggested it. He convinced my to buzz my hair with confidence that it will look good. I trusted his word and just finished my last session and am extremely happy with the results. I recommend him to everyone looking scalp micro-pigmentation!! Best in NJ hands down..

Jeremy Ramirez
05/22/2022
I live closr to Maine and decided to drive down to get this done after researching it for a while. I decided to go with Scalps because they were really responsive on the phone and I felt really good after getting off the phone with them. Verry professional and the process was extremely easy. Love the results and place was great. Must go if you hate being bald

Andre Burkett
05/09/2022
I truly had an outstanding experience with Alex. He definitely has a passion and strong desire in his work. His experience and knowledge made me feel confident to listen to his advice during my entire process. Thanks Alex.

Ethan Franklin
05/05/2022
My friend recommended alex to me after getting his procedure done. I never heard of this before but then saw my friend come back with a hairline and he told me what he did. I was comfiortable because I already seen my friends result. Easy process which took about a month to finish. highly recommend if you live in NJ

Aamir Idrees
01/21/2022
You cannot go wrong with Scalps. Alex is a true professional who listens to your feedback and addresses any concerns promptly. He will not advise you for anything unsuited for you even if you are completely willing to pay extra. A good value for money.